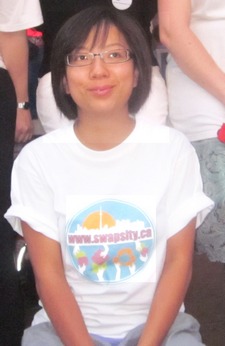 Two weeks ago, we hosted a super successful and fun Movie Music Eco-Swap at the Live Green Toronto Festival and helped Torontonians save thousands of items--and dollars--from landfills. Check out our last blog post for the full rundown and photos of the event and read Swapsity teammate Vivian Cheng's firsthand account. Here's Vivian's recap in her own words:

Sitting at the check-out booth on the day of the event, I had the opportunity to observe some swappers firsthand.

The heat didn't seem to bother most swappers as their eyes darted from covers to covers at the aisles of CDs and DVDs. I was usually greeted by huge grins on their faces at the check-out. Some would start telling me what kind of cool CDs or movies they found and what a great idea the swap event was. This is when I would respond enthusiastically with "Please tell us what you think by leaving us a comment!" Needless to say, the comments were all awesome! One lady was so excited, she visited the Swap Zone twice and left a comment each time.

By mid-day there were definitely some familiar faces--those who had braced the blazing sun to return to the Swap Zone to look for treasures to add to their own collection. A gentleman who was there at the very start of the day with his bags of goodies, came back five times throughout the day. Every time he was telling me that the weather was too hot and he must go. He returned again and again. The last time I saw him, he told me he was done and he was hungry and must grab dinner. I thanked him for coming and told him to enjoy all his new finds. As swaps go, some find what they're looking for and others don't. One lady came by the second time, although still excited about the whole idea of swapping, she was unable to find folk music but she told me she was optimistic and already looking forward to our next swap event.

Since our Swap Zone was right beside a pedestrian sidewalk, we had a lot of curious onlookers. Some walked by with family and friends and saw the collection of CDs on the tables. One man reached into the Swap Zone tent through the barriers to show his wife a CD he apparently was so excited to see and began to tell her his stories. 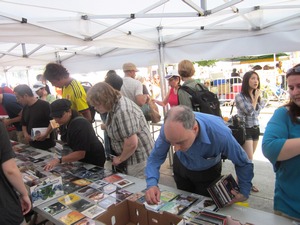 Others hung around the vinyl record corner of the booth just to chat with other record enthusiasts. They exchange stories of their favourite artists, cover designs, and most importantly, their own two cents on which records were the best to swap for. A couple really took their time going through the stacks of records. They meticulously siphoned through the records time and time again and painstakingly narrowed down to about a dozen. They were so focused--the energy was intense! Finally, they tentatively walked up to me at the check-out. I asked them if they were sure with their choices (as a joke) and we turned to realize there was just a drop-off of another 150 records. I smiled as they exchanged a look of disbelief, excitement, confusion, exhaustion all in a span of two seconds.

The moral of the story is: people love their treasures but it takes stamina to find your best swaps.